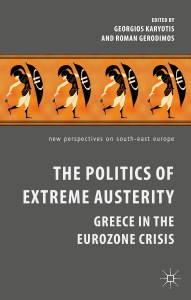 In late 2009, Greece found itself in the global spotlight as the country struggled to remain solvent and in the Eurozone. The Greek debt crisis became the subject of world summits, international news headlines and intense market activity. In the four years that followed, the Greek government implemented a series of radical austerity measures, while receiving bailouts and loans of unprecedented magnitude. The situation in Greece revealed structural deficiencies in the European integration project and threatened the existence of the Eurozone itself.

This volume investigates the framing, policies and politics of extreme austerity during those crucial four years. It also puts the Greek case into a global context by comparing it to the situation in countries that have faced similar challenges, such as Spain, Ireland, Argentina and Turkey. Featuring multidisciplinary contributions from leading social scientists and an exclusive interview with George Papandreou – the former Greek Prime Minister who handled the crisis from 2009 to 2011 – this is the first comprehensive account of the economic crisis at the heart of Europe.

‘What happens when a prosperous, mature democracy is hit by an unprecedented economic depression? An outstanding group of researchers explores several dimensions of this critical and fascinating question, covering multiple facets of both politics and policy. Centered on the Greek case yet embedding it into a broader comparative context, this book provide multiple and valuable insights, thus launching a new area of investigation.’
– Stathis N. Kalyvas, Wolfers Professor of Political Science and Director, Program on Order, Conflict, and Violence, Yale University, USA

‘If you want to understand how to survive today’s Eurozone crisis, read Georgios Karyotis and Roman Gerodimos’ The Politics of Extreme Austerity. They have gathered an extraordinary roster of economists, political scientists, media experts, policy makers and others to shed light on how framing of crises shapes public debate and public policy (and vice versa), often for the worse. Their devastating analysis of Greece shows how nations fall deeper into financial distress – and suggests how the Eurozone may be able to recover.’
– Susan Moeller, Director of the International Center for Media and the Public Agenda, University of Maryland, USA

‘This timely volume is one of the first to reflect on how the Greek debt crisis arose, how it was managed by both Europe and Greece, and what lessons are to be learned from it. It brings together a variety of experts to offer an insightful, broad and dispassionate perspective that goes beyond the immediacy of the case to provide a rich understanding.’
– Kevin Featherstone, Professor of Contemporary Greek Studies and Professor of European Politics, London School of Economics, UK

‘In my view austerity was probably an inevitable response to the Greek crisis, but the authors are right that it gave Greek citizens a ‘harsh and bitter tongue’ (the original meaning of the Greek word austeros) and led to a Greek tragedy. Their book is a must read to understand how and why.’
– André Sapir, Professor of Economics, Université Libre de Bruxelles, Belgium

You can purchase the book here